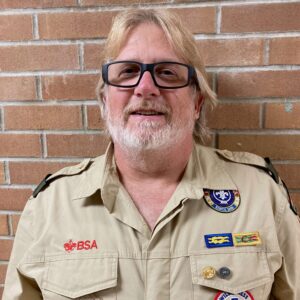 Keith Weber was a Life Scout as a youth and when his son Connor join Cub Scout in 2004 he became a Den Leader.  Connor received his Eagle in 2012 and Keith has remained in Scouting since.  He has held the positions of Den Leader for Pack 3075, Cubmaster for Pack 3075, Assistant Scoutmaster for Troop 1, Associate Advisor for Crew 2001 and Advisor for Crew 2001. Keith joined Troop 390 to help when his good friend Dale Sroka when he took over as the Scoutmaster. He is a member of the Order of the Arrow as Brotherhood.  He has been a lifelong avid backpacker and has mentored and trained 5 Philmont Crews and was the Adult Crew Advisor and completed a Philmont trek in 2014.  He has been certified 6 time in 12 years in Wilderness and remote First Aid.